By the way, in case you were thinking of going to the Conference, registration at the Conference for non-members of the Detroit Regional Chamber is a cool $2,925, about one and a half times as much as the average Detroit household earns in a month.

This gives you a good idea of how the event hosts think about the unwashed peninsular masses.

Back in March, we received the revelation that Dan Gilbert, having purchased naming rights to the three-mile M-1 streetcar for a cool $10 million, had decided to name it after…his own mortgage company, Quicken Loans.

Freep editor Stephen Henderson, a native Detroiter, professed to be shocked and disgusted by this development. Henderson, who’s done a good deal to draw attention to the need for better transit, wrote in his regular column: “The QLINE name suggests, subtly, that this isn’t about that wider need for transit, or the people who so desperately need it.”

Indeed, the choice of name suggests many things. END_OF_DOCUMENT_TOKEN_TO_BE_REPLACED

Half-hidden behind two newer school buildings, a stone’s throw from busy Mack Avenue in the heart of the Detroit Medical Center campus, a hundred-year-old brick structure in Midtown Detroit hides an extraordinary story.

In 2016, as the Michigan Legislature debates the future of the Detroit Public Schools, the tale of Detroit’s forgotten Lincoln School holds the key to understanding what has become of Michigan’s largest public school district.

It’s a story that Michigan has forgotten for a reason. END_OF_DOCUMENT_TOKEN_TO_BE_REPLACED 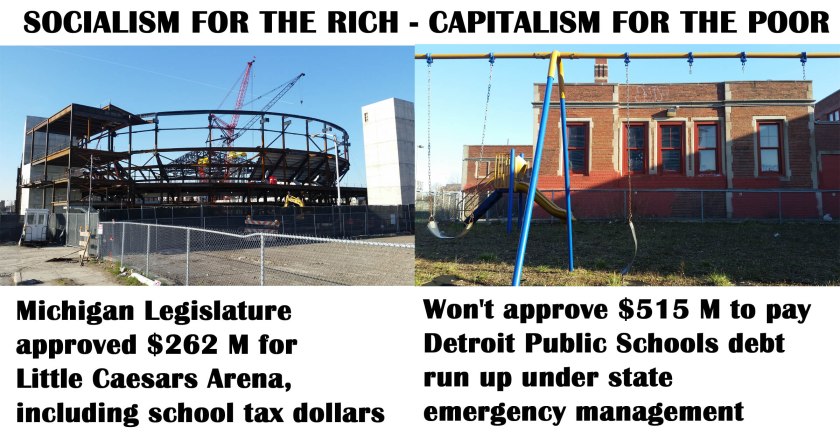 A month or two ago, I was arriving in Detroit from Ann Arbor on the Greyhound bus when something outside the window caught my eye: the juxtaposition of a shuttered public school, just off the I-75 service drive, with the flashing lights of the Motor City Casino behind it, and the new Red Wings arena – built with public funding – rising not far away.

After getting off the bus, I biked over and took a few photos, with the idea for a “meme,” like the one above, already in my head. Over the past few weeks, the Michigan Legislature’s refusal to allocate funding to the Detroit Public Schools made the grotesque immorality of the situation increasingly evident. I posted the image on my Facebook page around 4 pm yesterday, the second day of the DPS sickout, with the statement “Emergency management is never having to say you’re sorry.”

A day later, it’s been shared 674 times. I suppose you could say it struck a chord. (Update: up to 714 since I began writing this post.)

A little background: “Socialism for the rich, capitalism for the poor” is a phrase that has taken on a life of its own, but it was popularized (as “socialism for the rich, free enterprise for the poor”) by the late Michael Harrington, author of The Other America and longtime president of the Democratic Socialists of America. Harrington borrowed the phrase from the illustrious but now sadly forgotten housing expert and social reformer Charles Abrams, also of New York City, in describing the regressive effects of federal housing policy.

The hockey arena, now to be known as the Little Caesars Arena after its owners, the Ilitch family, is financed by 58% public funding, or $261 million in Michigan taxpayer dollars. According to Crain’s Detroit Business, the funding comes in the form of a state bond issue which is to be paid back by the Detroit Downtown Development Authority (DDA), using its property tax collection powers, by the year 2045. A 2014 ruling by Michigan Attorney General Bill Schuette cleared the way for the DDA to collect tax dollars that would otherwise go towards the state School Aid Fund, to the tune of $15 million per year.

That’s a somewhat different timetable than the one-time injection of money that DPS needs to stay afloat after years of state emergency management. But nonetheless, the state Legislature’s eagerness to satisfy the appetites of a billionaire pizza dynasty – and its contrasting indifference to the plight of tens of thousands of impoverished, often malnourished schoolchildren – is nothing short of scurrilous.

Perhaps ironically, the school featured in the photograph, at the interchange of I-75 and the Lodge, is the Benjamin Franklin School, opened in 1865 and shuttered in 2010 after stints as the Burton International Academy and an adult education center. The existing structure dates to 1922.

As the publisher of Poor Richard’s Almanack, among other pursuits, Benjamin Franklin popularized a variety of sayings. Among them: “The only thing more expensive than education is ignorance.”

That is a truth that the Republicans in the Michigan House seem determined to prove.